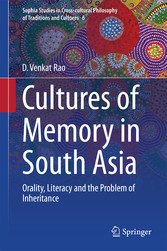 Cultures of Memory in South Asia - Orality, Literacy and the Problem of Inheritance

Cultures of Memory in South Asia - Orality, Literacy and the Problem of Inheritance

Culture of Memory in South Asia reconfigures European representations of India as a paradigmatic extension of a classical reading, which posits the relation between text and context in a determined way. It explores the South Asian cultural response to European 'textual' inheritances. The main argument of this work is that the reflective and generative nodes of Indian cultural formations are located in the configurations of memory, the body and idiom (verbal and visual), where the body or the body complex becomes the performative effect and medium of articulated memories. This work advances its arguments by engaging with mnemocultures-cultures of memory that survive and proliferate in speech and gesture. Drawing on Sanskrit and Telugu reflective sources, this work emphasizes the need to engage with cultural memory and the compositional modes of Indian reflective traditions. This important and original work focuses on the ruptured and stigmatised resources of heterogeneous Indian traditions and calls for critical humanities that move beyond the colonially configured received traditions. Cultures of Memory suggests the possibilities of transcultural critical humanities research and teaching initiatives from the Indian context in today's academy.

D. Venkat Rao teaches at the English and Foreign Languages University, Hyderabad. His earlier works include, In Citations: Readings in Area Studies of Culture (1999) and a translation of The Last Brahmin (2007). He writes in English and Telugu in the areas of literary and cultural studies, mnemocultures and comparative thought.