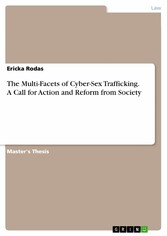 The Multi-Facets of Cyber-Sex Trafficking. A Call for Action and Reform from Society

The Multi-Facets of Cyber-Sex Trafficking. A Call for Action and Reform from Society

Master's Thesis from the year 2014 in the subject Law - Public Law / Constitutional Law / Basic Rights, New York University (Center for Global Affairs), course: Graduate Thesis, language: English, abstract: In the year 2014, human trafficking is still prevalent. Traffickers around the world abuse vulnerable individuals and rob them of their freedom to be safe from harm despite the international and national laws that are in place. In particular, sex trafficking, a subset of human trafficking is a form of discrimination in which people in power, typically men, take advantage of the vulnerabilities of women and children- though men are also victims-to exploit them for their services, whether for labor and/or sex. In addition, deception, fraud, force, and coercion are often used to recruit victims (UNODC 2000, Article 3(a)) although that should not be the main factor when investigating and prosecuting these crimes; for children proof of the threat or use of force or coercion is not required. Already a hidden crime due to the difficulty of identifying the traffickers and victims, the advances in internet technology have offered traffickers a new mechanism to escape detection from law enforcement. Internet offers affordability, accessibility, and anonymity -the 'Triple-A Engine Effect' (Manning 2006, 133). Shawn Henry, former Executive Assistant Director of the FBI informed the public that the Internet, despite its contribution to knowledge, has many setbacks. 'At any given time, there are an estimated 750,000 child predators online - and they all have a key to your house via the Internet' (FBI News Video 2011, Shawn Henry). As a result, it is time for individuals to be more cognizant of the importance of internet safety in order to combat cyber-sex trafficking. In May 2013, the use of the Internet to facilitate sex trafficking came to the fore again with the case in the Philippines in which three girls were rescued from a ring forcing them to perform live sex shows via the Internet for customers. Often the customers-- mostly Americans and Europeans--paid $56/minute for the girls to perform live sexual acts (web-cam sex) based on the customers' typed requests transmitted via computers (de Leon 2013). In the case of the three girls, who were eight years old when the abuse started, U.S. agencies, the Philippine National Police and the non-profit Visayan Forum Foundation received tips on one of their frequent customers, Jeffrey Herschell from Washington, Pennsylvania with the help of the victims. This information helped law enforcement arrest and sentence the offender to 12 years in federal prison (Coorlim 2013).