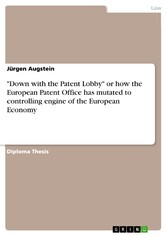 Diploma Thesis from the year 2008 in the subject Law - European and International Law, Intellectual Properties, grade: 1, University of Linz (Institute of European Law ), 30 entries in the bibliography, language: English, abstract: The patent law is based on intellectual property rights. The groundwork for this was laid in 1883 by the Paris Convention for the Protection of Industrial Property1. The international treaty allows for regional treaties, such as the Patent Cooperation Treaty (PCT) and the Agreement of the Trade-Relative Aspects of Intellectual Property Rights (TRIPs) of the WTO the European Patent Convention (EPC). These are all treaties devolving from the Paris Convention. The EPC covers Europe (in the broadest sense) (cf. Art. 45 PCT). The European Community (EC) is an entity, by international law (cf. Art. 281 EC) and may represent its constituent states in the concerns of the WIPO and WTO. The community has to respect International treaties such as the Paris Convention and many procedures and measures of the EC respond to those treaties. In this thesis only the EPC will be discussed. The EPC created a uniform body of substantive patent law for patents in Europe. It established a single European procedure for the grant of patents. A European patent is worth its fee, because the owner of the patent can use it to economic advantage. The EPC also laid the groundwork for the introduction of a Community Patent by the EC Council. The initial concept of a Community Patent was first discussed in 1960. The last attempt to finalize the Community Patent was made in 2007.