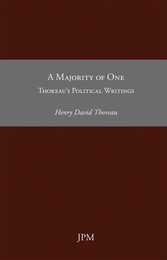 A Majority of One - Thoreau's Political Writings

A Majority of One - Thoreau's Political Writings

In 1846, Henry David Thoreau refused to pay his poll taxes, so he was arrested and imprisoned. This formed the basis for his essay 'On the Duty of Civil Disobedience' (first published as 'Resistance to Civil Government'), where he argues that individuals should not permit governments to overrule or atrophy their consciences, and that they have the duty 'to stop the machine' of the Government. This volume collects other three reformist essays titled 'A Plea for Captain John Brown', 'Life without Principle' and 'Reform and the Reformers', which complement the key concepts of Thoreau's political ideology.

Henry David Thoreau (July 12, 1817 - May 6, 1862) was an American essayist, poet, philosopher, abolitionist, naturalist, tax resister, development critic, surveyor, and historian. A leading transcendentalist, Thoreau is best known for his book Walden, a reflection upon simple living in natural surroundings, and his essay Resistance to Civil Government (also known as Civil Disobedience), an argument for disobedience to an unjust state.