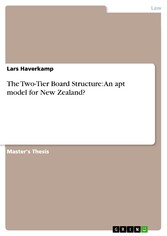 The Two-Tier Board Structure: An apt model for New Zealand?

The Two-Tier Board Structure: An apt model for New Zealand?

Master's Thesis from the year 2006 in the subject Law - Comparative Legal Systems, Comparative Law, grade: B, University of Canterbury (Law School), 70 entries in the bibliography, language: English, abstract: In times of global corporate disasters many turn to corporate board structures in order to find solutions. The board of directors is responsible for monitoring the management and is therefore in the focal point of many legal scholars. Current US board structures have proved to fail to provide sufficient supervision. Scandals such as Enron and WorldCom have shuttered especially American but also European legislatures. Highest priority, at present, is to reestablish investors' faith in the securities market. Corporations are facing reluctant investments or even fearful avoidance of the stock market. Many US scholars see a solution in the adoption of the German two-tier board system and the European Union gives the managements of European Corporations, the Societas Europeas, the possibility to opt for the two-tier-system. In the 1997 Report on the Corporate Governance Movement in France, even the Organization for Economic Co-Operation and Development (OECD) praised the two-tier-system to be superior and more effective in monitoring management than the unitary system, which is in place in the majority of countries, including the United States of America (USA) and New Zealand, at the moment. The two-tier-system is on the rise. France offers an optional adoption for major stock companies and the Netherlands and the Scandinavian countries demand a two-tier structure once a stock company has reached a certain size. New Zealand has not faced similar scandals to Enron. Therefore, some might think that there is no necessity to indulge in a discussion on changing board structures. However, the New Zealand market is highly reliant on international investments and has lately lost ground in the global competition in this regard. The USA and Germany are both undoubtedly global players and, as André puts it, 'by virtually any standard ... the world's largest and most successful economies'. Germany has a large influence on the legislation of the European Union, one of New Zealand's largest trade partners. Studies have revealed that large international companies impose the two-tier system on French subsidiaries. If this is done in order to maintain more formal control over the subsidiary or to give the subsidiary more flexibility, is irrelevant.