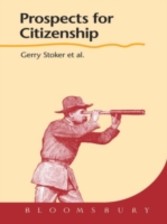 Is citizenship in decline due to globalisation and an erosion of civic participation and democratic representation? Or is it merely transformed and extended to new levels and larger scales? Should we assess these challenges and changes primarily from a perspective of global justice, or consider also membership in a democratic polity as itself a basic good? Prospects for Citizenship addresses these broad questions in a unique collaborative effort. The result is an impressive book that looks at the future of citizenship from multiple research perspectives while remaining coherent in its overall purpose.Rainer Baub'ck, European University Institute, FlorenceThis book offers a perspicuous overview of the prospects for citizenship in our contemporary political context. The authorial team draw on a wide range of empirical and normative research in order to offer an incisive analysis of the problems and pressures of citizenship in the twenty-first century. The authors focus in particular on the apparent decline of traditional forms of civic engagement, the emergence of new forms of participation and the relationship between citizenship and globalization.